Fairmount Reservoir was built in the early 1900’s as part of the Syracuse Suburban Water Company, a predecessor to OCWA–Central New York’s Water Authority. It is the primary storage facility for the Authority’s Otisco Lake water supply and manages about half of all water OCWA delivers daily. The site has been in continuous service since its construction, and is recognizable by its distinctive stone gate house located off Hinsdale Road in the Town of Camillus. 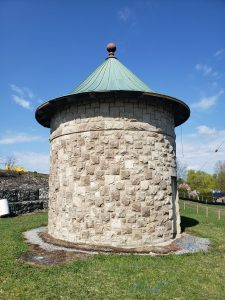 The 5 million gallon (MG) open reservoir on the site was decommissioned in the 1990s and since then the 10 MG steel tank has been supporting the area. 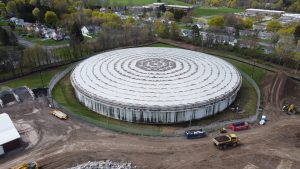 In early April 2021, OCWA broke ground on a total renovation of the storage facility and in a few short weeks the legacy open reservoir is gone, making way for a pair of 6 MG concrete water storage tanks. The new tanks represent an investment in the next 100 years for the Otisco Lake supply and for OCWA.

Work has progressed quickly, and OCWA’s contractor has moved nearly all the earth for the construction of the foundation of the first (East) tank. Existing piping and facilities are being demolished, with the exception of the original 1900’s gate house. The gate house has been out of service since the 90’s but will be kept as a monument to recognize the original facilities. 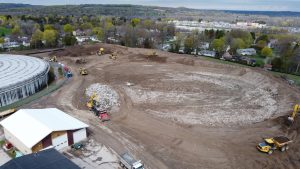 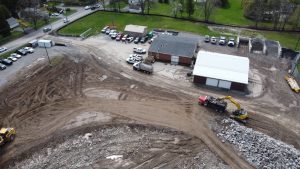 Starting in mid-May, our contractor will begin forming and pouring the footer and floor of the new tank. Along side the floor there will be several casting beds constructed. These wood-frames beds will be used to manufacture reinforced concrete panels on-site.

Once all the panels are produced, they will be stood up and assembled along the perimeter of the foundation. During this time the tank will take shape quickly. Its appearance will be a bit unsightly as the panels start with an exposed and uncoated steel skin. However, once the panels are erected a layer of concrete is applied to the exterior to begin forming the final outer layer and permanently protect the steel from corrosion.

While the walls are being erected, the contractor will also begin forming the columns that will ultimately support the flat concrete roof of the tank. All the while our distribution maintenance crews that utilize Fairmount as their headquarters facility are working alongside the construction to continue making sure our 500,000+ consumers receive safe, clean and reliable water service.