This spring, OCWA–Central New York’s Water Authority–is commencing construction of a new water storage facility at its Fairmount Reservoir and Work Center facility at 313 Hinsdale Road in Camillus. The existing abandoned open reservoir and currently in-service steel tank will be demolished and replaced with two new concrete water storage tanks as conceptually depicted below. The project represents a significant upgrade to a critical water storage facility, with the components being replaced dating back to the early 1900’s. 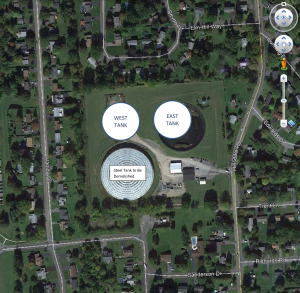 The project involves a substantial amount of piping installation, earth moving, forming, pouring of reinforced concrete and demolition activities. During the project OCWA’s routine operations will continue, but traffic and use of heavy equipment will increase by the contractors doing the work.

The work will occur in three (3) phases over the next three (3) years. The project should not impact the water service to the area during any of the three phases. During the first phase of construction, the existing steel tank will remain in service at least until January of 2022 as the new East Tank is built.

The second phase will take place during 2022 and include demolition of the existing steel tank and construction of the second (West) concrete tank. The third phase largely includes grading, restoration and site cleanup, and is expected to extend into 2023. Existing Steel Tank to be demolished

The new concrete tanks will be the same height as the existing steel tank but smaller in diameter. The photographs below show examples of what the new tanks will generally look like. 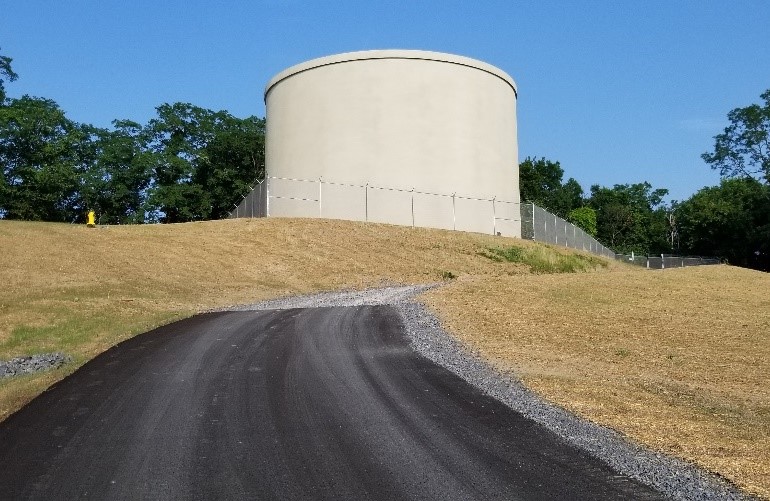 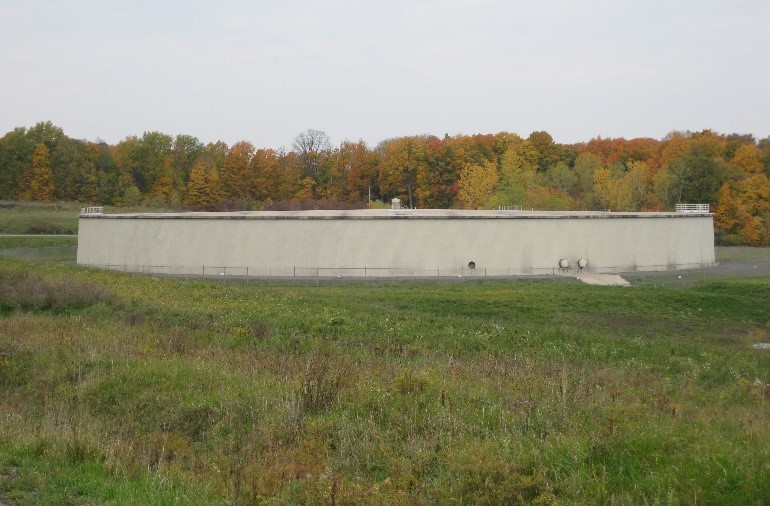 Phase 1:   East Tank Construction: Expected to start around April 2021 and include demolition of the abandoned open reservoir and associated appurtenances, installation of a new valve vault, connection to the two large transmission mains, new storm water conveyances, new water piping on the site, construction of a new concrete tank within the footprint of the demolished open reservoir and electrical and instrumentation work to allow the East Tank to become fully operational.  The new tank will be constructed in three major, independent assemblies: The floor will be poured as a large, mostly continuous concrete slab. This work occurs early in the project and is one of the most intense efforts. During this floor work, it is expected for a short period of time that the contractor will need to work multiple back-to-back shifts through the night to maintain continuous pouring of concrete. Thankfully, the walls and roof casting operations are more routine and do not require the same level of continuous production. During the majority of the tank construction, a large crane will be present onsite to lift various components into place. Phase 1 will end with testing of the new tank and, upon acceptance, switching our operations over to it.

Phase 2:  West Tank Construction: Construction activities for the West Tank will begin once the East Tank is in service.  During this phase, the demolition of the existing steel tank and associated appurtenances will occur. The West Tank is a mirror image of the East Tank and thus the work will occur in a similar manner over the course of 2022. One major difference is that the West Tank will include an advanced geotechnical grid under its foundation to stabilize the soil upon which it is being built.

Phase 3:  Site Restoration: Anticipating that the West Tank will be completed in the winter of 2022, site restoration will likely not be completed due to weather and lack of growing conditions. Temporary measures will be utilized to maintain the site until spring of 2023. The work in 2023 will include demolition of any remaining items, site work, final grading, stabilization activities, installation, startup of any other control systems and clean up after contractor demobilization.

During construction, there may be a minor amount of traffic disruption and elevated noise levels during normal construction working hours. Once complete, the site will return to its normal activities as one of OCWA’s key distribution maintenance facilities and water storage reservoirs.