The origin of what eventually became the OCWA water distribution system began in 1907 with the installation of transmission mains by the Onondaga Suburban Water Company from Otisco Lake to parts of Marcellus, Camillus, Solvay and DeWitt following the NY Central and Hudson Railroad lines.  After the successor company operating the system experienced financial difficulties following WW II, OCWA was created by act of the New York State Legislature in 1950. 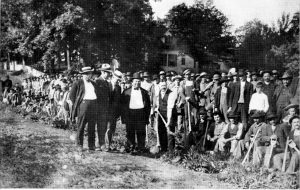 The Authority assumed ownership and began operation of the private water system in December 1955 with the original mandate to serve 12 towns in Onondaga County (Camillus, Cicero, Clay, DeWitt, Elbridge, Geddes, Lysander, Manlius, Marcellus, Onondaga, Salinan and Van Buren), with 9,119 total customers and 134 miles of main.  The bulk of those mains were constructed of cast iron due to its strength and high resistance to most corrosion.

Lake Ontario and the Metropolitan Water Board

In 1960, after a $50 million residential construction project had been halted in the Syracuse suburbs due to a lack of public water, a joint committee of distinguished representatives from the City of Syracuse and Onondaga County recommended that Lake Ontario be developed as an additional source of water supply for the county.  The Onondaga County Metropolitan Water Board (MWB) was created to oversee construction and operation of the new water system (known as the Onondaga County Water District), including a state-of-the-art treatment facility, pump stations, storage facilities and 25.8 miles of 54-inch transmission main running from Lake Ontario to Terminal Reservoir in Clay. 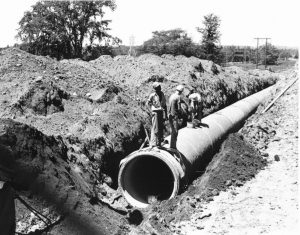 The transmission pipeline was made of precast concreate and was laid in a 99-foot right-of-way that is large enough to accommodate a parallel pipeline in the future.   The new system began operations on June 1, 1967 with capacity of 36 million gallons a day (MGD).  Since then, the capacity of the system has increased to 50 MGD.

Starting in the early 1960s, OCWA began receiving requests from local municipalities to assume responsibility for the operation of their water systems.  The Authority worked with each municipality to develop a mutually acceptable agreement to manage each system, which typically involved entering into a long-term lease.  The largest of these consolidated systems was the Onondaga County Water District, which OCWA assumed from MWB in 2017.  The result is that what was once a system serving 12 towns in a single county, is now a retail and wholesale water system serving 38 towns, 15 villages and four cities in five counties (Onondaga, Oswego, Madison, Oneida and Cayuga).

Today’s distribution network includes 2,200 miles of main, with transmission mains ranging in size from 16” to 60”, and distribution mains ranging in size from 1” to 14”.  The vast majority of OCWA’s mains are constructed of ductile iron pipe, which was first introduced around 1948.  The major advantage of ductile iron pipe over cast iron is that it is less brittle and more flexible.  In recent years, the Authority has wrapped its ductile pipes in polyethylene encasement to protect them from soil corrosion and extend their useful life. 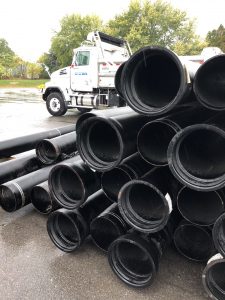 OCWA’s larger transmission mains (30” and larger) are all made from reinforced concrete pipe.  The advantages of this pipe are its durability, strength, flexibility, carry capacity and cost.  Other pipes in the various water systems OCWA leases are made from a variety of materials, including cast iron, steel, asbestos cement and plastic. OCWA annually reinvests between $8 and $10 million on capital improvements to its system, including $3 to $4 million to replace old water mains and install new mains.  The vast majority of these new mains are constructed using ductile iron pipe lined with cement mortar to help protect the pipe from corrosion, which is stronger than other pipe material and is designed to last 100 years.  OCWA will continue to work with municipalities, developers and water system owners who are interested in partnering with us to provide safe, reliable and affordable water to Central New Yorkers.