Environmental Project of the Year Awarded to OCWA

Environmental Project of the Year Awarded to OCWA

OCWA–Central New York’s Water Authority–was honored to receive an Environmental Project of the Year Award from the American Public Works Association (New York Chapter, Central Branch) at the association’s annual awards banquet held on November 14 in Canastota.   The award was in recognition of OCWA’s recent successful replacement of the 500,000 gallon Oakridge water storage tank in the Town of Camillus. 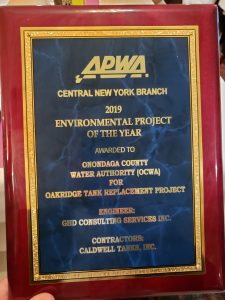 The tank was originally constructed in 1966 and operated by the Town until a 2013 lease agreement transferred operation and maintenance to OCWA. Upon acquiring the facility, OCWA performed a condition assessment and evaluated plans for long term rehabilitation or replacement.  The report identified that the existing facility was nearing the end of its useful life, and that its tall, narrow geometry limited the useful storage volume.

What made the replacement challenging, and what was recognized by the APWA during its awards presentation, were several unique environmental issues involved with the project.  The tank site is a 1.8-acre wooded parcel surrounded by single-family residential housing. The existing tank was situated at the top of a steep hill with grades that fall away in all directions. The original driveway used to construct the facility was abandoned and unofficially absorbed into the housing parcels.  The replacement driveway followed a different alignment with a sharp switchback and 16 percent grades.  The driveway was navigable with 4-wheel drive pickups, but improvements were required for large construction vehicle access, which would include coordinating moving the existing large electrical transformer with the electric utility.

Other challenges encountered with the project included:

Despite delays of three (3) to four (4) months incurred due to relocation of electrical service, coordination with telecommunication companies, and additional delay due to weather, the overall project schedule only slipped by one (1) month and was completed $9,700 under the original construction budget of $2,030,500.

Pictured speaking and accepting the award on behalf of OCWA is Andrew Weiss, Executive Engineer